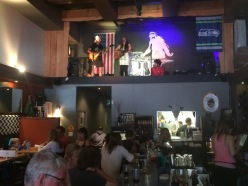 We arrived from the black ball ferry midday into Port Angeles from Victoria that took about one hour and 36 minutes on the ferry. Again, epic as we passed through the islands and through the US border and into the tiny cozy town of Port Angeles. Home of the Olympic and Hoh national rain forest it is where many people get their start before their trek into the forest. 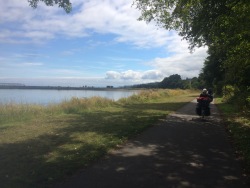 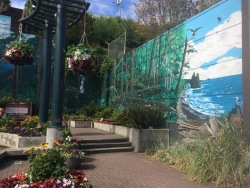 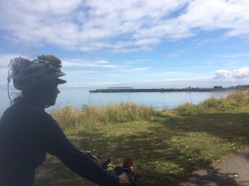 We arrived in town and wanted to play a show so we asked a bar owner we met on the ferry if we could play at his bar. Two hours later we were on stage praise on the sidewalk and then later elevated on a second story stage that looked down upon the bar. At the bar called “next door,” we met a man who let us crash at his place less than a mile from downtown and the venue we were playing around. So many nice people along the way! Yipppeee! The outdoor sidewalk concert quickly turned into a full-on elevated stage venue inside and we played a couple hours on this stage that was on the second story looking down onto the bar. A pretty amazing venue.

We slept in the lawn of a friend and played music around the bonfire!

Next, we traveled next to Port Townsend and along the way we passed by squirm which is where my great aunt lives! 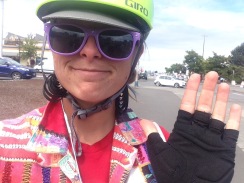 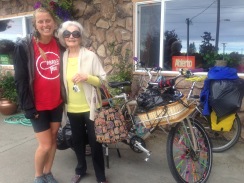 This part of the tour was super super super important to me. After my mother passed in 2007 I started using my mother’s last name as my artist name. Molly Aigner turned Molly Keen for my art and inspiration. I sign my paintings M. Keen and my mother has been with me through all my journeys and paintings. So meeting another Keen was amazing. She is a painter herself and signs her paintings M. Keen as well! What a blessing and amazing thing to have in common. We spoke of family and I heard stories I never had before. 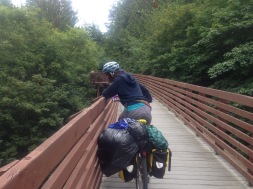 I gave her a last minute call to see if he could have lunch or coffee and she agreed! Met me within ten minutes at the Mexican restaurant down from her home. What a gift! Her name is Marion keen and he is an artist and painter as well. He was married to my grandfather’s brother, Stan. What a beautiful reunion it was!

Marion let me know that she has a son and family in Port Townsend so I grabbed the number of her son, drew. The next morning after we camped at a clearing in the fleet and made a lovely fire. We stopped for gas at a gas station and sure enough, there came Pamela and Drew running to our group of cyclists and asking “Which one of you is Molly?”. They had found our group and the reunion was beautiful. The last time I saw them was apparently when I was only a couple of months old and I was at their wedding. They are Keen’s as well! I loved meeting them and getting to know them. I invited Pamela to our show and she came for the whole set with chocolate and gifts included! She was so sweet to connect with and just retired from working for the library for 25+years! What a treat it was to be able to get to know her!

The show was set on the water at a park and we had a great turnout. After the show, we rode another 5 miles to a friends house where we slept in the front yard. It was a great place to stay for the night and we were all super tired!

The next day we were in route to Seattle! We rode a different way from Port Townsend to the Edmonds ferry! I was able to ride early enough to get dinner with my family and enjoy Seattle! More to come on the Seattle shows that I have helped book and put together. It is going to be an amazing weekend! Stay tuned.